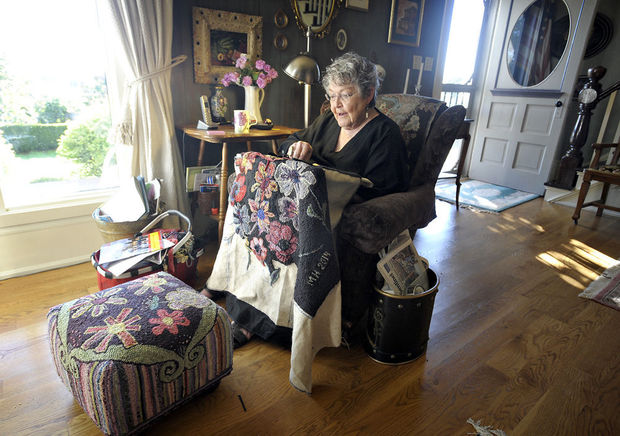 Mary Holzapfel was the founder and first president of Oregon Women for Agriculture.  The below article appeared in the Albany Democrat Herald October 7, 2014.

Frugal — with flair — across a lifetime

When grass seed farmer Ralph Holzapfel married extension agent Mary Lucy from Minot, North Dakota, he asked her how much money she would need each month to run a household.

The newlyweds moved into an 1890 farmhouse in Tangent in 1962, and it was pretty much as it had been in 1890: Heat came from a wood stove in the cramped kitchen, which had a few glass-fronted cabinets. The foundation sagged, the walkway sloped. The roof leaked so much that Mary watched the coffee cans fill up in a matter of hours. And it didn’t help that the Columbus Day storm hit the farm 13 days after the Holzapfels moved in, knocking down trees and further damaging the old house.

In the first year — pregnant with her first daughter — she replaced all the leaking windows, added sheetrock, cupboards, carpeting in the living room, a washer and drier, refrigerator and a new heating system. When the sink leaked, she replaced all the piping under it.

She didn’t know it then, but her $250 allowance was all she’d get a month during the couple’s 36-year marriage.

“If I needed any more than that, he wanted me to come to him for it, you see,” she said, with a wry little smile.

She didn’t buy new if something else would do, long before words like “recycle, “repurpose” and “shabby chic” were common.

As her daughters grew, she reconfigured the house, built a family room and added more homey touches. An octagon-shaped glass coffee table became a window in the glassed-in porch she built off the garden.

She turned the metal supports that came with a new tractor into garden arbors.

“I added those metal things on top,” she said, “I think they were part of old weather vanes.”

A hand-cranked machine turns old coats into strips of bright wool that Mary hooks into an original cover for an ottoman that she built and upholstered. Hand-hooked rugs of her own design dot the wood floors.

Outside, bricks from the old wood stove chimney replaced a crumbling concrete walk. A window seat with storage became a cabinet for baby clothes and then storage in the laundry room. The ripply glass old original kitchen cabinets hold antique china in the pantry.

Then, there’s the outside.

Her artistry is evident throughout a garden that encircles the house, covering with flowers, bushes, trees, pathways and art pieces a place where only grass and a few stubborn old apple trees had been.

About 40 years ago, she dug a fish pond out of old dirt road, and added a little waterfall piped through a historic hand pump and splashing onto concrete lily pads she made herself.

She paused by one old apple tree that is crooked, leaning, and almost entirely hollow — but which still hangs with lush apples.

“I think this was here before the house,” she said, with some fondness. She made apple butter from the apples this year.

But just as she’s changed the house for 52 years — even after her husband’s death in 1998 — she is poised to move soon to a house nearer to her daughters.

What is she looking for? Something smaller, certainly.